On Friday, May 9th, 2014, as the opening ceremony to the Cache River Nature Fest and as a celebration of the Governor’s proclamation of May as Invasive Species Awareness Month, a Regional Awards Ceremony was hosted by Shawnee Resource Conservation and Development Area, Inc. (RC&D) and the River to River Cooperative Weed Management Area (CWMA), in order to recognize 15 individuals highly dedicated to invasive plant species control work in Southern Illinois.  These individuals recognize that one of the biggest challenges facing conservation today is the widespread problem of non-native invasive species, which destroy habitat for native plants and animals.  The award recipients have all taken their knowledge of invasive species one step further, acting with responsibility to create a positive impact on the diversity of habitats in Southern Illinois.   Several CWMA partnering organizations and Steering Committee members were present to support the recipients and their work.  The award recipients and their contributions are as follows:

Illinois Invasive Species Strike Team work:  Tharran Hobson (TNC), Caleb Grantham (TNC), Nick Seaton (TNC), Bob Lindsay (IDNR) – Tharran is the River Program Restoration Manager for The Nature Conservancy’s Illinois River Program, and the program manager for our local Southern Illinois Invasive Species Strike Team, a role in which he helps to direct critical conservation efforts in the region.  He was nominated for his persistence in pursuing the implementation of the Strike Team grant funding.  Without Tharran’s efforts, the Strike Team contract would not have been processed, and the team would not have been hired.  Strike Team members Caleb Grantham and Nick Seaton were recognized for their spring 2014 work.  By mid-April, they had assisted with 1,787 acres of prescribed burning on high quality sites in Southern Illinois, including conservation work to protect a state endangered plant population.  Caleb and Nick are graduates of the Southern Illinois University Carbondale (SIUC) Department of Forestry B.S. program.  Caleb and Nick controlled invasive plants with IDNR as 2013 summer interns, directed by Heritage Biologist, Bob Lindsay.  Bob has continued to be a critical mentor for the Strike Team, and he was responsible for continuing invasive species control on more than 8 critical sites, during the 2013 lapse in funding for the Strike Team.

Shawnee National Forest’s Invasive Species Management Environmental Assessment - Richard Blume-Weaver (USFS) – Richard was instrumental in keeping the Forest’s Invasive Species Management Environmental Assessment on track and moving forward.  This management decision allows the Forest to actively treat invasive species on about 1800 acres across Southern Illinois.  The plan focuses on controlling four of our priority invasive species (kudzu, bush honeysuckle, Chinese yam and garlic mustard).  An additional focus area is the control of invasive species in 23 natural areas that are in need of protection.  Richard’s dedication and persistence to the management of invasive species on the Shawnee National Forest and Southern Illinois are an asset to the entire region.

Unity Point School Invasive Species Education: Chris Midden – Chris teaches science at Unity Point School in Makanda, Illinois.  He has developed a unit on invasive species, which he covers while teaching ecology, and he takes his entire 6th grade class of students into the field at the Green Earth, Inc. (GE) Chautauqua Bottoms site, to pull garlic mustard and learn first-hand about the effects of invasive species on native biodiversity.  This GE site is known for a diverse population of native spring ephemeral species, and is the opportune place to teach hands-on lessons of the impacts of invasions.  We would like to thank Chris and Unity Point and all the 6th grade students for this valuable contribution to Invasive Species Education, as well as the positive impact on garlic mustard control at this biodiverse site in Carbondale.

Volunteer Public Education Efforts:  Dr. Andrew West – Dr. West was recognized for extensive involvement in numerous volunteer work days, public presentations and workshops, and for leading hikes for the public to discuss native biodiversity and the impacts of invasive species on the region of Southern Illinois.  He has worked for almost 40 years as a land and natural resource manager, 30 years with IDNR and brief stints with the U.S. Forest Service, Fish and Wildlife Service, and Missouri Dept. of Conservation. He was site superintendent at Trail of Tears State Forest for 15 of his 30 years with the State of Illinois.  He continues to use his knowledge to assist landowners with invasive species control in Southern Illinois, and our regional efforts in Invasive species control are strengthened through his work.

Volunteer Control Work with Green Earth, Inc.:  Mike Long and Chris Long – Mike and Chris have been long-time supporters of Green Earth, Inc. (GE) in Carbondale, IL.  GE provides an important function to Carbondale residents, by preserving green spaces within an urban environment, which make nature accessible to people of all backgrounds and promoting environmental education.  The efforts of GE began with the purchase of a 20 acre piece of land over 25 years ago, and now they manage over 190 acres on 6 tracts of land. GE is a non-profit and depends on monetary donations and volunteer efforts to manage their properties. Unfortunately, as natural habitat-urban interfaces, these properties are often plagued by a variety of invasive issues.  Mike and Chris have stepped in to fill the need for invasive species control at some GE sites.  They have adopted GE sites for control, have written a management plan for invasives control, and have paid their employees out-of-pocket to manage invasive plants at these properties.  We thank them for their efforts, for providing this service, and therefore, helping to raise awareness about the issue of invasive species in Carbondale.

Regional Volunteer Invasive Species Control and Outreach:  Bruce Henry - As Rx fire coordinator and crew manager for the Saluki Fire Dawgs, SIUC’s prescribed fire team, Bruce helps facilitate burns on state and private lands, encouraging the promotion of healthy forest ecosystems and the control of invasive species in Southern Illinois.  Bruce assists with GE volunteer workdays as a volunteer and member of the Omega Chapter- Xi Sigma Pi, Honors Society.  Bruce serves as a mentor, sharing his vast knowledge of invasive species control and native plant ID with current Strike Team members, undergraduate students and peers.  He has provided outreach and oversight to a number of garlic mustard "pull-events" with the Sierra Club and local schools, and he has led native plant hikes through Natural Areas in the Cache River Wetlands for local school groups.  He has provided landowners with invasive species control and identification information on his own and through NRCS funded programs.  He volunteered time to travel to Northern Illinois to train the Northern Illinois Strike Team in Jo Davies County.  Bruce is the caretaker of the field house at Cypress Creek National Wildlife Refuge and provides invasive species control on site. Additionally, Bruce has recently been awarded the position of natural history biologist with the Missouri Department of Conservation for the Southeastern region of Missouri.

Landowner Support and Education through NRCS Programs: Ryan Pankau (NRCS Conservation Forester) – Ryan and the Natural Resources Conservation Service (NRCS) have been critical supporters and partners in CWMA efforts to control invasive species.  Private landowners own 82% of the forested land in Illinois, and it can be difficult to reach these diverse groups and individuals with technical assistance.  Ryan continues to help with this effort in Southern Illinois, providing invaluable support to landowners.  He speaks about NRCS assistance programs whenever the opportunity arises and has helped with organization and implementation of several workshops and trainings for landowners in the identification and control of invasive species.  He has provided much needed assistance in conservation issues in Southern Illinois by reaching out to landowners and going above and beyond what is expected as NRCS Conservation Forester.

Regional Training of Natural Resources Professionals and Volunteers: Sonja Lallemand - Sonja is being recognized for creating and implementing very successful programming that is becoming an established standard within the regional conservation community.  The Master Naturalist training that Sonja has brought to Southern Illinois is a highly sought-after program with many more individuals wanting the training than the program can accommodate.  To date, this University of Illinois Extension program has graduated approximately 60 students trained for conservation work.  Through training these passionate individuals, Sonja is creating an invaluable resource for all conservation partners, and she is always looking for new ways to engage her students in invasive species issues.

Carbondale Park District Support in Invasive Species Outreach to the Public:  Kathy Renfro – Kathy has been instrumental in developing the partnerships and on-the-ground work for the pilot project of the Illinois Stop the Spread! program.  Illinois Stop the Spread! is focused on educating consumers about the invasiveness and other undesirable characteristics of the Callery (Bradford) pear.  The program is in the preliminary stages, but there is a large education and outreach component, with a positive message, which offers consumers and others a list of locally-available alternatives to Callery pear.  A demonstration planting of these native tree alternatives has recently been established at Attuck’s Park in Carbondale with Kathy’s and Grounds Manager Randy Montgomery’s help.  Kathy’s and Carbondale Park District’s involvement in this campaign has been key in raising awareness of the issues surrounding Callery pear.

Invasive Species Control on Private Lands: Gary and Sharon Swisher - Gary and Sharon have earned this recognition for invasive species control efforts on their own property (~275 forested acres).  They are very active at controlling invasives and consistently conducting monitoring and follow-up treatments.  They truly understand what is needed to effectively control invasives species.  As landowners, they benefit from controlling invasives, their children benefit from a healthy future forest and their neighbors benefit from a reduced seed source in the community.  Gary has worked at controlling invasives on his neighbor’s property and has been an influential example of success.  By contributing to the reduction of invasive populations in Jackson County and by influencing neighboring landowners to do the same, the Swishers have truly exemplified excellence in addressing invasive species.

Recognition of Legislative Support in Invasive Species Issues: State Representative Brandon Phelps – Rep. Phelps was the chief sponsor of the Bill to amend the Illinois Exotic Weed Act by adding kudzu and six non-native varieties of buckthorn.  This was the first bill Rep. Phelps served as a sponsor, during his freshman year as a legislator.  These additions to the exotic weed list were very significant. Through this law, it became illegal to buy, sell or plant these plants in Illinois.  Buckthorn has created extensive damage to thousands of acres in northern Illinois and anyone who has traveled to the southern United States has seen the overwhelming impact of kudzu.  While this bill became law ten years ago, it was the last time the Illinois Weed Act was amended, creating a statewide impact.   We recognize Rep. Phelps for his important legislative contribution.

The RC&D, CWMA, and all partners truly appreciate the efforts and successes of these individuals to further our regional invasive species control efforts. 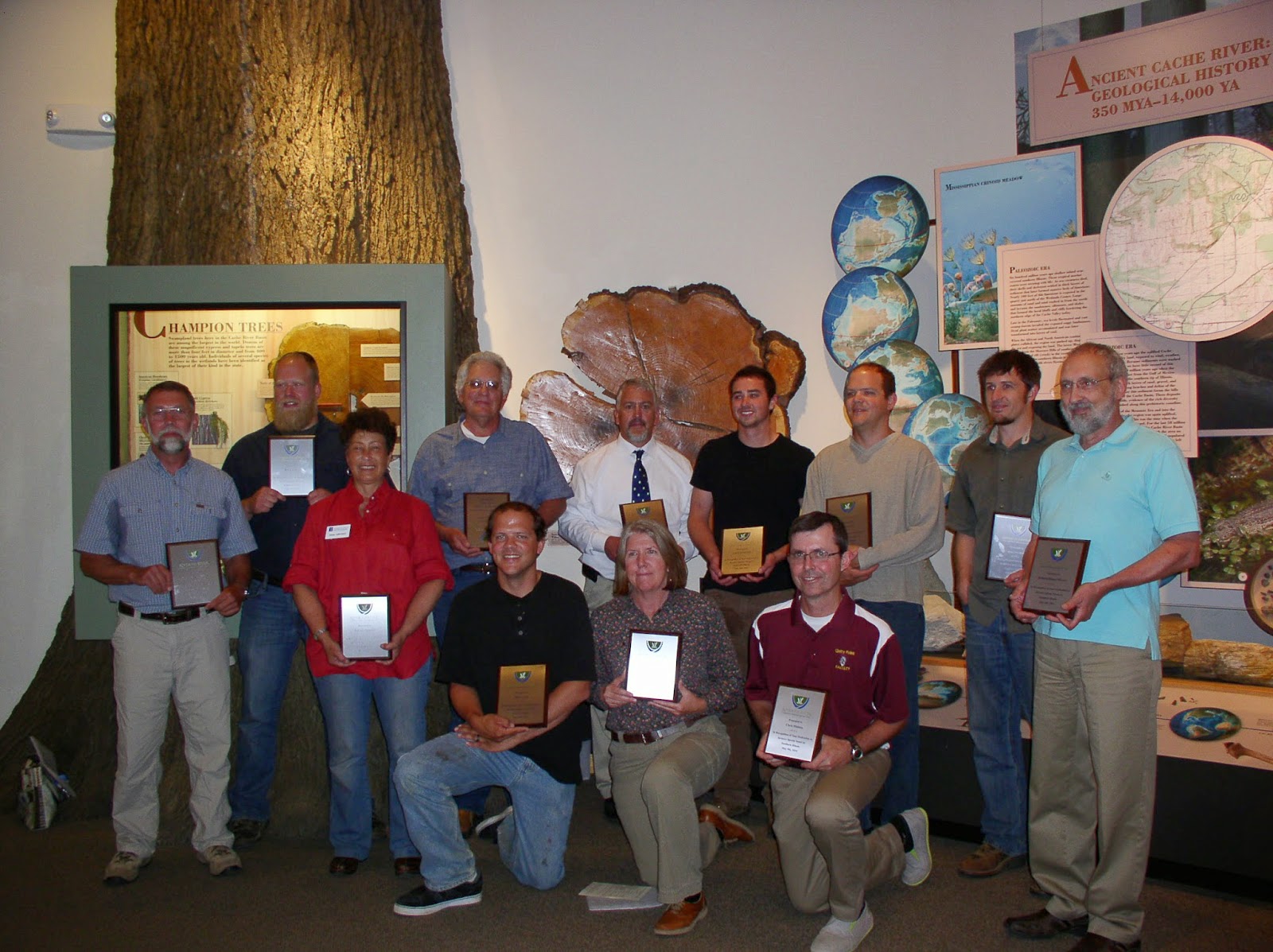