Achyranthes japonica (Miq.) Nakai (Amaranthaceae), or Japanese chaff flower, is a relatively new exotic species found in southern Illinois. Japanese chaff flower is native to eastern and southeastern Asia, but was first found in the United States in 1981 along the Tug Fork River, a tributary of the Big Sandy River in Martin County, Kentucky. It is unknown how this species was first introduced to the United States, but it is believed to coincide with railroad traffic. This invasive species has quickly spread along the Ohio River and its tributaries. Today, Japanese chaff flower can be found in every county along the Ohio River from West Virginia to Illinois, and has been confirmed in Missouri along the Mississippi River in 2011. It is currently found in nine states (West Virginia, Kentucky, Ohio, Indiana, Illinois, Missouri, Tennessee, Alabama, and Georgia). 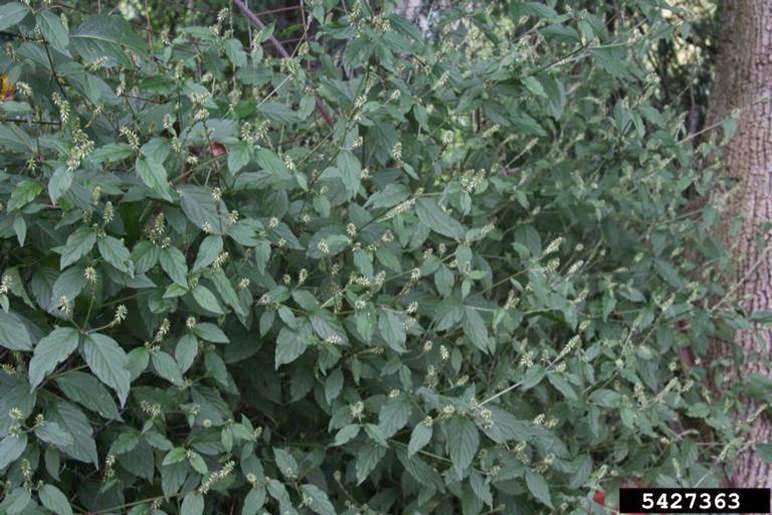 Japanese chaff flower is a perennial and herbaceous species that is easy to identify. It has been determined that this species becomes perennial at an early growth stage, by the time it reaches three nodes. Japanese chaff flower’s leaves are opposite and simple. The stem at ground level is red, which is seen in other pigweed species. The flowers occur on erect spikes at the end of the stems and upper branches. The flowers, which lack petals, occur in tight clusters and diverge at nearly a right angle, which gives the flowers a bottle-brush look. As the fruits mature, the spikes elongate and the fruits lay flat against the spike.
The fruits have two stiff bracts that help in dispersal. Japanese chaff flower primarily disperses its seeds in water during heavy floods or by attaching to clothing, shoes, hair, or animal fur. “Becoming entangled or ‘hitch-hiking’ is a dispersal mechanism associated with Japanese chaff flower seed,” said Travis Neal, a master’s student at Southern Illinois University, Carbondale. “Its dispersal is enhanced during particular life stages, which enables Japanese chaff flower to readily invade native plant communities of southern Illinois as well as the surrounding Ohio and Mississippi River Valleys.” Japanese chaff flower can be found growing in areas with partial sun and moist soils, but can also grow in heavily shaded and dry area. Populations of this species have been found in bottomland forests, along riverbanks, along agriculture field margins, and in roadside ditches.
Japanese chaff flower starts growing in late spring and flowers in the late summer. Flowers can continue to develop into the early fall, even when seed is starting to be produced. As the plants die off in the fall, the stems and remaining seed turn an orange-brown color. The dead plant stand can remain erect even into the winter until heavy snow, ice, or floods cause the stems to break. The high germination rate (~ 62% in drought years and ~94% in average years) and the high seed output (up to 1,000/plant) of this species make it a strong competitor for the following year. It has similar competitive capabilities of other species in the same family, such as Palmer amaranth (Amaranthus palmeri) or common waterhemp (Amarnathus tuberculatus).   In addition, this species has been observed to outcompete other invasive species, such as Japanese stilt grass (Microstegium vimineum).

Humans are the main concern of spread for this species. After any activities (i.e. hiking, camping, hunting, fishing) in an infested area, you should make sure to thoroughly clean clothing, boots, equipment, and pets to help prevent any further spread especially in the fall when seeds are mature. Although little is known about the management of this invasive species, initial treatments of triclopyr at a 2% solution appeared to be most effective. Other herbicides, such as glyphosate, aminopyralid and 2,4-D ester, are also effective at higher doses. The perennial plants of this species are highly susceptible to foliar applications of broad leaf systemic herbicides, which makes them a good management tool in the field. Hand pulling or digging large, mature stands is not feasible due to the extensive root systems. If you find Japanese chaff flower in Illinois, please report the location to Karla Gage at rtrcwma@gmail.com.